Attack on Cotta: Thoughts of an Iranun warrior at sunrise on the day of Salakayan

Located along the shores of Moro Gulf, the Kingdom of Uranen (referred later in the literature as Iranun or Illanon) is among the oldest civilizations in Southeast Asia. The first Islamic missionaries, Shariff Aulia and Shariff Kabunsuan, cemented Islam as the primary religion through intermarriages with the Iranuns. Sultan Kudarat was a direct descendant from this union. The languages of the Maranao and Maguindanao are deeply rooted in the Iranun language suggesting that the Iranuns predated these two tribes. 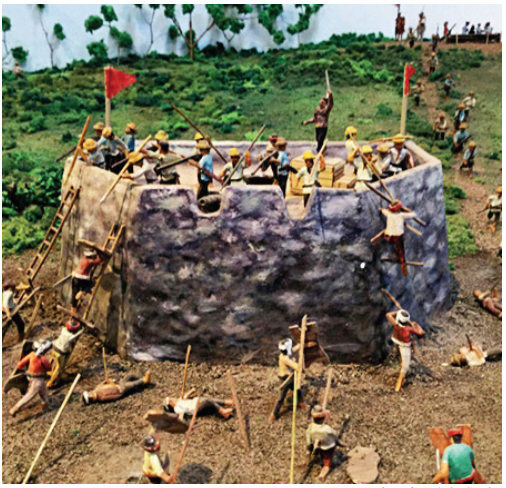 Piracy is a Western perception when it comes to our islands. Raiding other lands for reasons of war or for wealth and slaves was a common occupation throughout the archipelago. A native could be a pearl diver one day, a farmer the next and a pirate later. Raiding as a profession was practiced by the Visayans, particularly the tribe called the Pintados, who are noted to raid as far as Formosa and the South China coast. The Iranuns, Tausugs and Maranaos were also raiders of Cochin China, Siam and throughout the Malay and Indonesian archipelago. Slavery was an institution and source of wealth for perhaps thousands of years and not merely practiced by Islamic tribes of the Philippine Archipelago.

The Battle for Miagao, referred in Miagao as Salakayan, occurred on May 7, 1754 during a period of intense warfare between the Muslims of Mindanao who resisted conversion to Christianity and the Spanish and Christianized allies of Visayas and Luzon. Islam, prior to Spanish conquest, was a benign religion in the Visayas and Luzon, tolerant of natives practicing their own brand of religion, from animism to worship of ancestors. For this reason, Christianization of the tribes in both Visayas and Luzon was relatively easy. Muslims in Mindanao were more deeply religious and the call for jihad against Spain created a single enemy for the normally warring tribes. 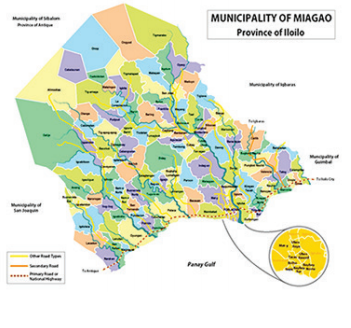 I am Haji Ranom of the Bantilan clan of the mighty Iranuns, leader of the flotilla of praus, caracoas, lanongs and vintas of Iranun and Tausug warriors. I am sailing towards the east coast of Aninipay and towards the city of Irong-Irong. Over 100 years ago the Iranuns, the Maranaos and the Tausugs swore an oath to Sultan Kudarat when he declared jihad against the Spanish infidels. Since
then, the various clan wars of the Iranuns ceased and the wars among the Muslim tribes ended, replaced by constant warfare against the Spanish and their Christianized allies. Just beyond the horizon, in the dark of night, my ships wait for the wind and sunrise to take us on the mad dash

to the shores of Aninipay. The port city of Irong-Irong, the Spanish dogs call the place Iloilo, has an impregnable fortress and numerous Spanish warships. It would be costly to attack the city directly. Instead, we will hit them where 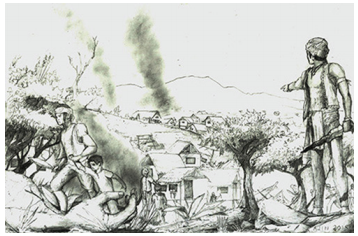 they are weakest. Other fleets are lying in wait south of Aninipay and others in the north of the town they call Oton, places far enough for the Spanish to mount a quick response. My task on this invasion? To attack the center of the east coast, a town called Miag-ao. When I was younger, I came twice to this seaside town. The first time, we burned their church, took many captives and war trophies. The second time, six years later, we burned the second church they built to replace the first one. They have not built any new one since. Maybe they are just too afraid we will come back again to burn the third one they might build. These others around me on this prau come for slaves, gold, silver, guns and any wealth the infidels might have. The young ones come for the glory of Allah. I am here for revenge. Last year my two sons, joined the 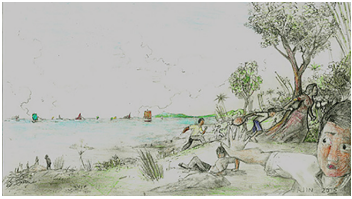 combined fleet of Iranuns and Tausugs to attack the Visayas, but was intercepted in the high seas by a massive fleet of Spanish ships and praus, manned by thousands of Cebuanos, Tagalogs and the

Pintados. Over a hundred and fifty ofour own ships were sunk, along with over two thousand of Allah’s warriors. My revelry was interrupted by Muhammad, the Tausug datu whose men are on board with my Iranun warriors. 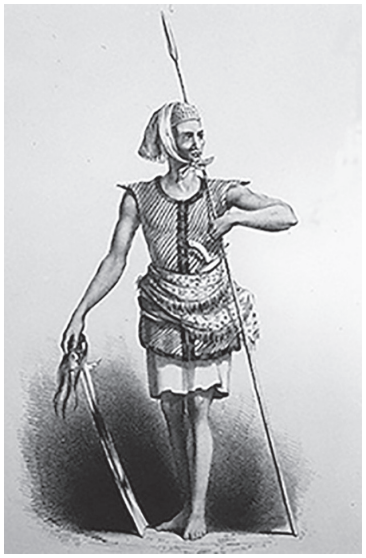 An “Iranun” sea-warrior attired in the distinctive thick cotton quilted red vest, and armed with a long spear and kampilan, a long heavy “lanoon sword” ornamented with human hair as described in The Global Economy and the Sulu Zone:Connections, Commodities and Culture.

Over a hundred of us crammed on the top deck of this prau, one of the largest in the fleet. “Maunu-unu na kaw?” says Muhammad, asking how I am feeling. I replied, “Marayaw.” I am fine. He asked if I wish to join the men. They could not sleep in anticipation of

the big battle at sunrise. The Tausugs, who call themselves ‘men of the current,’ are great seafarers and fierce warriors. But, they are also lovers of a good story they call katakata. The stories are mostly about tales they call Manuk-manuk Bulawan, describing the lives and deeds of the great sultans. But, they have funnier tales called ‘posong’ about commoners tricking the sultans. The men are laughing hard. They must be telling posong tales.

Over a hundred of us are crammed on the top deck of this prau, one of the largest in the fleet including Muhammad, the Tausug datu whose men are on board with my Iranun warriors.

The Tausugs, who call themselves ‘men of the current,’ are great seafarers and fierce warriors.

I smiled to Muhammad but said nothing. I told him, “the sun is about to rise and the men should get ready soon. But, do let them finish their storytelling first.”

In the Iranun tradition, the training of sons for battle starts early at the age of 10. It was the Christian year 1744 when different kind of white men came, called the Dutchmen, whose ships bombarded Jolo and then built a base called Port Holland in Maluso in the island of Basilan,. They proclaimed that  the land belonged to the Dutch East India Company. 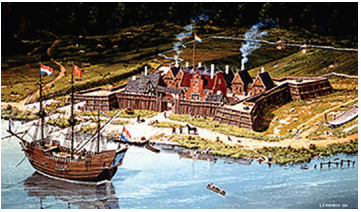 Artist’s illustration of the short-lived Dutch base of Port Holland in Maluso, Basilan.

Even today, I do not know what they meant or who they were. Were they the same as the Spanish? They certainly looked alike. The Prince of the Tausugs, Datu Bantilan, called for a holy war against the  Dutchmen of Port Holland. The Iranuns heeded the call and we sailed into Maluso with the Tausugs. We burned their ships and slaughtered the Dutchmen in the fortress. Some were brought as war trophies of slaves for the auction blocks of Sulawesi. My reminiscing was broken by the loud sound of the 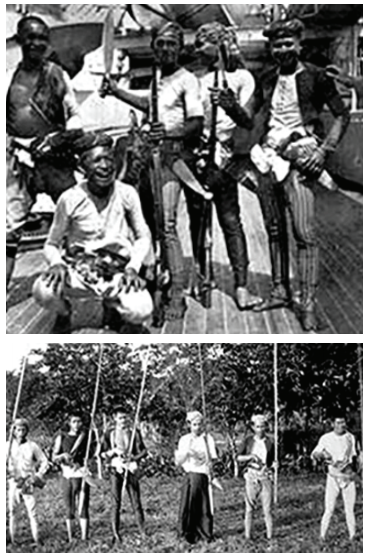 imam’s voice admonishing all the warriors to pray in the direction of Makkah as the first rays of the morning sun slowly creeped out from the horizon. It is time.

After the morning prayer, the Iranuns and the Tausugs sat down, spears up in the air and their shields on their lap. The sails of all the boats were unfurled, taking wind. The fleet was moving slowly at first. Then the bows of the prau pounded the surf as the oars started its rhythmic paddling, matching the tempo of the drums. The wind is at our back, pushing us towards the shore, adding to the propulsion of the oars. Each prau moving faster and faster as if we are all racing to the finish line.

Miag-ao’s coastline comes closer and closer to view. The men are excited. They begin striking their shields with their swords. Every boat competing to be the loudest; each boat racing to be the first to reach the shore. I can see the flash of sunlight against mirrors from the high ground they call Barangit-itip. And another flash from the beach on the far right of the shoreline, from a place I knew as Calampitao. Perhaps, they know we are coming!

My last big raid in Miag-ao was different. We came silently up the river, paddled as far as the boat could take us until the river became shallow. Then we disembarked and a silent march until we reach the outskirts of town before the attack began. That way, hardly anyone escaped the raid. It always worked well, but the Sultan wanted us to go fast this time. Straight to the beach, kill everyone, no slaves to be taken. And, as soon as we are 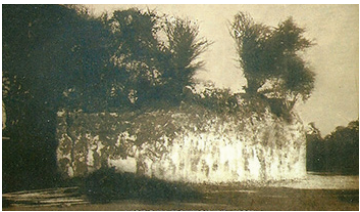 finished with Miag-ao, for us to rejoin the other flotilla attacking Oton where they expected more resistance. Our lantaka swivel canons were sunk along with our praus on that same disaster last year that took my sons. Most of the canons are at the bottom of the sea. On this raid, there are no canons to support our men. We are taking Miag-ao on a frontal assault. And, the signals show they expect us. Over a thousand warriors here are just too eager for battle.Getting closer to the beach. The leading praus are almost there, heading directly to the Christian’s Cotta, a miniscule defensive watchtower made of coral stones. Normally too low to be much of a defense, but the infidels have added

wooden palisades the height of two men on top of the watchtower. Our last foray into Miagao seven years before, this Cotta did not exist. These infidels did not fight. They simply ran as fast as they could into the hills and mountains.

This time I think they intend to fight. That’s good. For once we will have a real battle rather the slaughter of chickens.

I can see men rushing to put up poles on top and in the front of the Cotta. Red flags on bamboo poles. I think they are taunting us to attack.

Datu Masud’s prau is the first to reach the beach, another two not far behind. Our Iranun and Tausug warriors, the first 200, are jumping out and running towards the flags, their shields up, lances forward, swords unsheathed. On top of the Cotta is an infidel, shirtless, tattooed, raising a kampilan pointing towards us.

These infidels seem ready to stand their ground. I can see more movement up the hill. I do not think the townspeople are running either. They seem to be forming up for a fight. Merchants, farmers, clerks against my battle hardened army? The entire Spanish Army might be beyond the hill and I would not know until they come rushing down.

As my prau hits the sand, I jumped out along with the rest of my men. I shouted, “Allah Akbar!” And in unison, a thousand of us, on the beach and on the approaching praus, shouted, “Allah Akbar.” That single thunderous cry would have chilled the bones of these infidel dogs.

Towards Cotta I go. My friend Ranom’s kris swirling in the air. My lancers throwing spears towards Cotta. Any second now the battle will be joined.

This is a good day for a fight.

‘The fight at the beach’ Pencil sketch by Leopoldo ‘Ajin’ Moragas II.