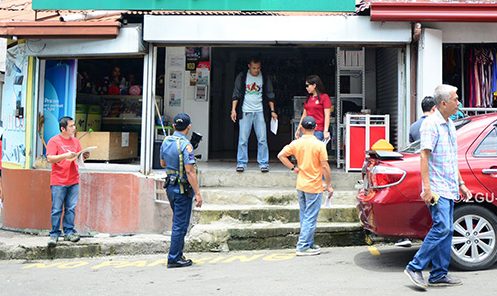 MIAGAO, Iloilo – The members of the Municipal Anti- Illegal Structures and Constructions Committee (MAISCC) and Municipal Task Force on Road Clearing are out and about to implement the Orders and execute the powers bested them to clear from any obstruction and illegal construction all the major roads of the municipality.

On September 13, 2019, they have conducted the inventory and surveyed all roads and areas to be cleared.

Mrs. Ruby Paranga during the briefing to the members of the task force said that to be removed and considered road obstructions are:

Mayor Macario N. Napulan, MD told the members to first identify the objects of obstruction and subsequently notify all owners of their violations citing the DILG Memorandum Circular 2019-121. Demolition will come after the failure of the owner to comply with the Notice.

Earlier on, Mayor Napulan ordered for the transfer of all market vendors occupying Octaviano and Netura Streets to the Municipal Food Terminal which form part of the compliance of the said DILG MC.

Given the most number of barangays at 119, Mayor Napulan through a Memorandum Order also tapped the Barangay in the strict implementation of the Order.

“We have long been eager to work on this concern especially that traffic become one of the unresolved problem of the LGU, but we are constraint of the legalities and boundaries set forth by Law. This time, we have this DILG MC that mandates us to work on it and we are up to do what is bestowed and expected from us in the MLGU,” said Mayor Napulan. (ABMande)