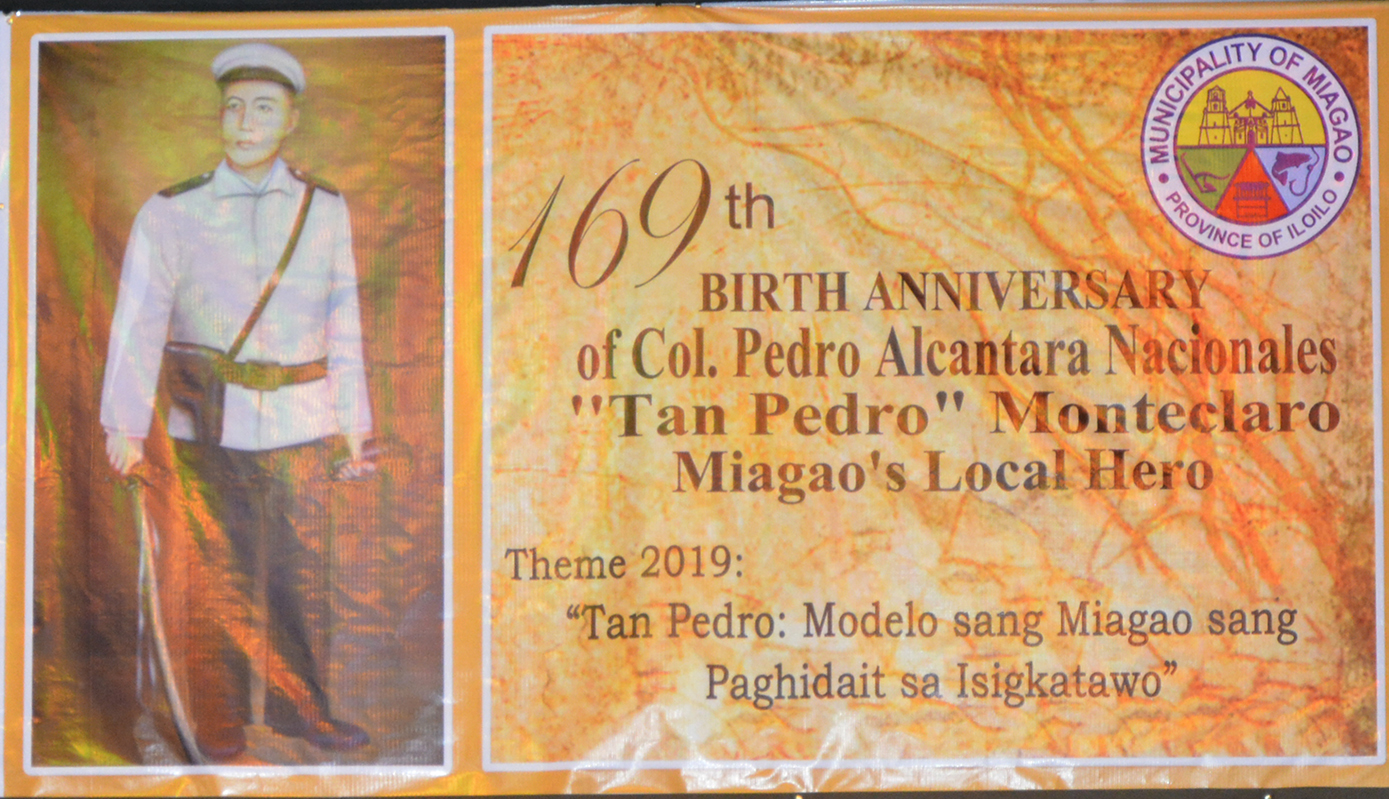 Pedro Alcantara Monteclaro y Nacionales was born on October 15, 1850. He was the eldest son of Captain Bartolome Monteclaro y Tupaz and Ramona Nacionales y Orbe. He had three brothers: Ciriaco, Serafin, and Jose.

Pedro received his early training and education from his parents who were devout Roman Catholics. When he was of school age, he was enrolled on the town’s parochial school run by the friars.

When he was still of tender age, he showed signs of being talented and deeply religious. In 1865 he studied at the Seminario Colegio de Jaro in Iloilo City where he obtained his Bachelors of Arts Degree.

The year 1891marked the beginning of the highly eventful life of Captain Pedro. The Spanish and town authorities saw him the qualities of a good and natural leader. He was elected Teniente Mayor in 1891 with Simeon Firmeza as Gobernadorcillo. In 1892, he became the Capitan Municipal and elected Gobernadorcillo in 1893 and reelected Gobernadorillo in 1894.

During his term of office and until the subsequent years, he was addressed respectfully as Capitan Pedro. However, he was also popularly called Tan Pedro. He is also appointed as Juez de Paz from 1895 to 1898.

in September 1898, Tan Pedro was named Comandante by the government and lead the volunteer Militia (Soldatos Voluntarios) in the town.

In December 1898, there was a conference of all revolutionary officers n Santa Barbara, Iloilo which wa presided by General Martin Delgado. Comandante Pedro and his soldiers attended the conference held at General Delgado’s Headquarters. December 16, 1898, Comandante Pedro together with his men, decided to pass by Jaro which was then under siege for days from the soldiers Colonel Quntin Salas and Colonel Agustin Solis.

Colonel Monteclaro and the rest of the Ilonggo rebel leaders fought bravely. However, by 1898, they realized the futility of struggle. Colonel Monteclaro surrendered to Major Vacher, Capt. McDonnel and Lt. Plummer. He was treated well by the Americans and was confined as a Priso Caballero. And was given privilege as a Liason Officer. His tact and influence proved successful. Peace reigned in the town when the Filipino soldiers surrendered to the Americans on the street of La Paz, now Quezon Street, on April 29, 1899.

In 1901 he was unanimously chosen by the people in Miagao as their first Municipal President from 1901 – 1903. In 1904 he finished his literary masterpiece, Ang Maragtas sang Panay.

Tan Pedro was a historian, a scholar, a soldier and a patriot, a composer of Spanish, Hiligaynon, and kinaray-a songs and poems, a good father and husband, a dedicated public servant, a born leader, and a ma of high integrity.

Tan Pedro the Legendary man of Miagao, died in grace of our Lord on April 13, 1909at age of 58. The great man died leaving behind legacy to the people of Miagao and because of him, Miagao has found its niche in the country’s history book.

Brief Biographical Sketch of Pedro Alcantara Monteclaro: A Hero of Panay 1850-1909 by